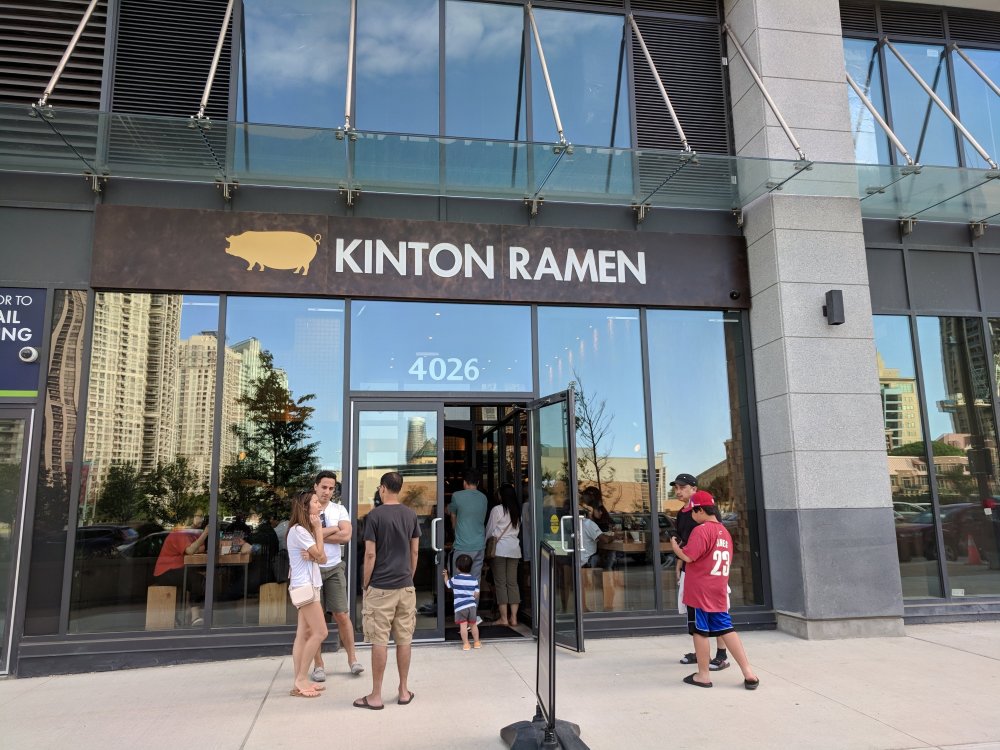 (I originally reviewed Kinton Ramen last June 2018, but I went today to try the Roast Beef Ramen, hence the reason for bumping this post. My Roast Beef Ramen review is at the last paragraph).

We went to the newly opened Kinton Ramen today. Yesterday was their grand opening offering 1/2 price ramen. Of course the line up was crazy yesterday. So we took a chance and came today for dinner.

We arrived at 5:15 pm; there was a small crowd outside, but we were willing to wait for our table. We got our table in 20 minutes. By the way, I really dont like the location where Kinton Ramen is, which is at those newer buildings near Square One – we have to pay for parking. Thats one of the reasons I dont go to Union Burger as often as I’d like to. 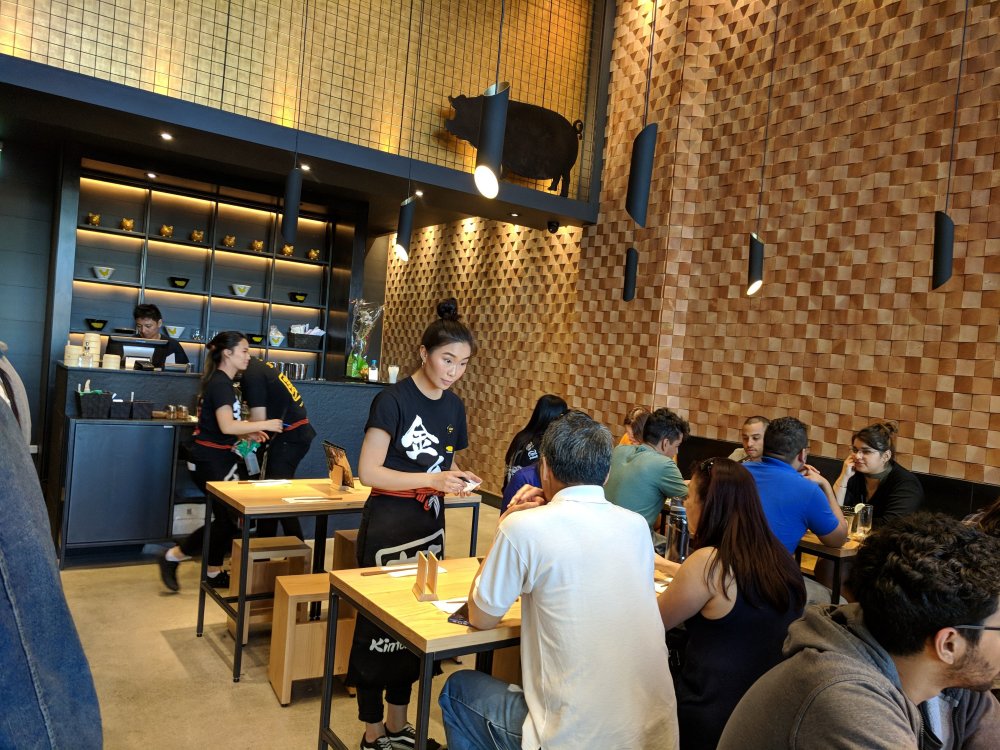 Anyway, Kinton Ramen is in a small space. Right now because they are a newly opened restaurant that everyone has been waiting for, the space is too small. It would be nice if the space was half a restaurant bigger. I think of Kenzo Ramen which is bigger than Kinton, and sometimes there is waiting room only… The restaurant is modern tho, and there is good energy and a good vibe.

We were seated at the counter which was great because we didnt want to share a table with strangers. All the servers were very nice and knew what they were doing.

Here is what we ordered:

We shared the Takowasabi. It was very good – nicely chilled, had a sweetness, but then you are hit with the powerful wasabi that instantly clears out your sinuses.

I ordered the Pork Miso Ramen, and I added an egg at the side. I chose thick noodles. This was quite good, the soup broth was not over salty, I could actually drink the broth. The egg was semi hard boiled and was cold inside. Warm egg would be nicer. We saw the cook torching the slices of pork; it was kind of neat watching him ‘cook’ the pork. It tasted great too, nice and tender and nice size pieces of pork. 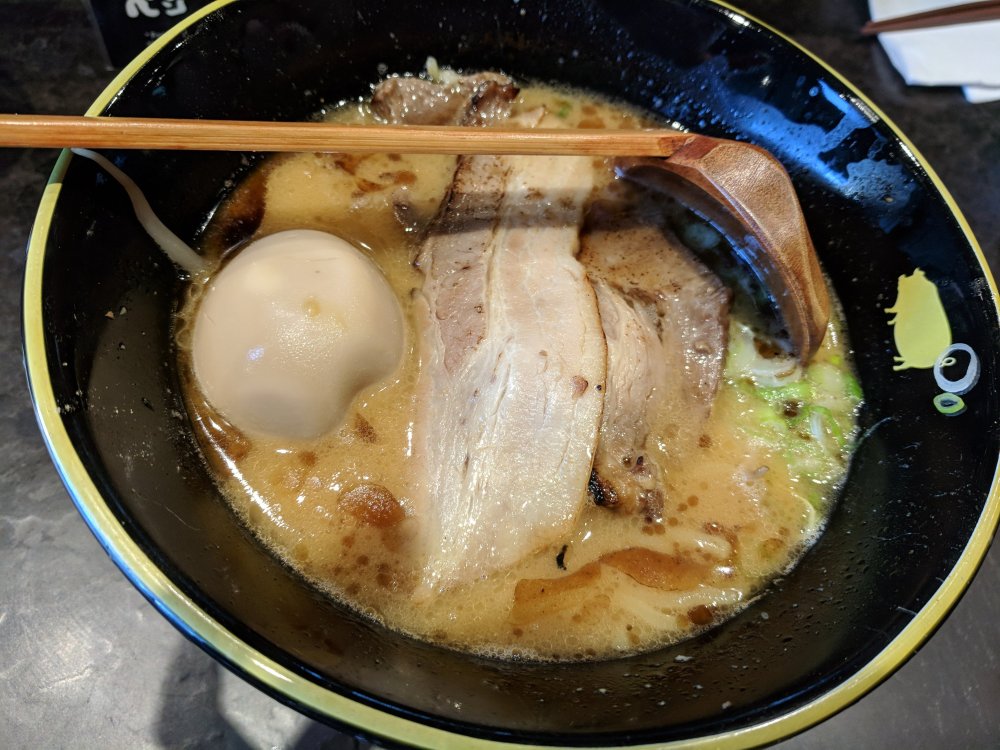 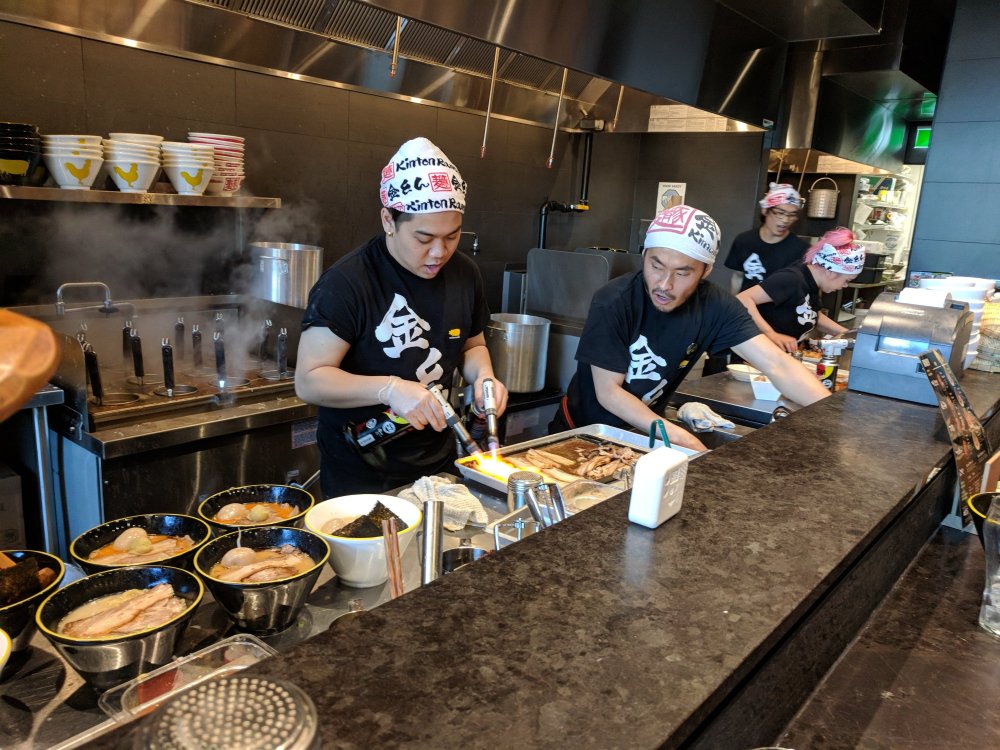 We also ordered the Pork Spicy Garlic Ramen. This was very hot and spicy I could not eat it. My daughter loves very spicy and had no problem eating it. Her nose was running by the time she finished her noodles. BTW, we both could not finish our food we were so full. 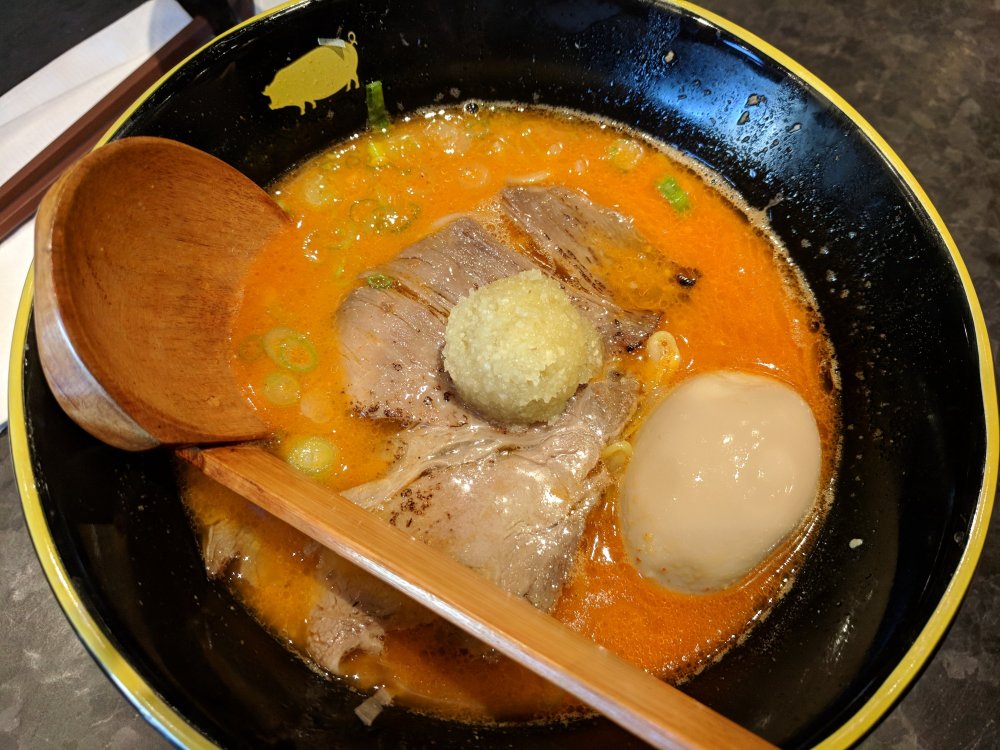 We needed to eat dessert even tho we were full. I ordered the Black Sesame Soy Milk Pudding (tastes like peanut butter), and Roasted Green Tea Pudding. I preferred the first pudding while my daughter ate the second.

Food was great, service was great. We were satisfied after our meal. The lineup outside doubled in size when we left the restaurant.

Update June 3, 2019:. We went today for the monthly special – Roast Beef Ramen. It looks delicious in their ads, but I was so disappointed. The dish was cold and no broth. The egg was too well done (wish the egg was raw). There really wasn’t alot of beef, they’re only a thin blanket slices of beef covering the noodles. I’m so disappointed what a huge let down 😣, I want to cry.