We took the long trek out from Mississauga to Markham this afternoon to try out RAKU Ramen & Izakaya. Someone had raved about the place so I wanted to give it a try. RAKU Ramen is located at the intersections of Kennedy Rd. & Hwy 7. It took us almost an hour to get there because I stupidly followed Google Maps and it instructed us to take Hwy 400 to Hwy 7 and to just drive across. (Will not be doing that again).

We arrived at RAKU Ramen approximately 50 minutes later and being in Markham and its in a Chinese plaza parking was an ordeal in itself. As some photos depicted the restaurant tries to be modern and upscale. You can tell the furnishings are economical rather than upscale. It sort’ve had a sterile feel to the atmosphere. It was nice enough, comfortable and clean.

We were seated quickly and the waiter brought us tea and salad as soon as we sat down. That was quite nice because after fighting the busy traffic across Hwy 7 to get here we were sort’ve feeling queasy and needed something immediately inside our stomach. You can’t go wrong with tea and salad I guess – crisp clean lettuce with zesty dressing, and nice hot tea.

The menu presentation was great – full of colour and made the food items look very attractive and edible. My daughter and I both ordered Ramen. I ordered the Tonkatsu Ramen, and my daughter ordered the Miso Ramen. The only difference between these two different Ramen dishes is the soup. The fillings are the same. We also ordered a side of Pork Belly and a Spicy Salmon Roll to share. I thought the prices were very affordable – $8 for ramen, $3.50 for pork belly, $6.50 for spicy salmon roll. 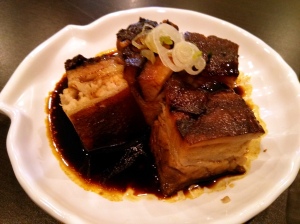 First is the Pork Belly. When the waiter brought it to the table I thought it looked really delicious – nice and meaty and plump, drizzled with soy sauce or something. The meat was tender but bland. I think they boiled it and then drizzle with the sauce? Soy sauce wasn’t salty so not sure if it was soy sauce. We did not finish it.

Next is the Spicy Salmon Roll. It was a good size for the price. I thought the salmon looked strange when it came to the table (I have gotten used to the spicy salmon being all mashed up with hot sauce). The salmon was in solid chunks. I thought it tasted mild and not particularly spicy, but at the same time it tasted good and fresh. My daughter could taste the zing in it.

Here is a photo of the Tonkatsu Ramen. I didn’t take a photo of the Miso Ramen because it would be identical. The only difference is in the taste. The Miso Ramen is a little saltier and tasted better, while I thought the Tonkatsu was a little tasteless. I liked the egg in there which was sort’ve hard boiled but the yolk was still a little soft. I didn’t particularly like the bamboo shoots which I thought were a little overpowering. I liked the bits of corn (frozen of course, lol). The noodles were tasteless. We both didn’t finish our ramen I think for a combination of two reasons – the ramen was just so so, and we thought the serving size was big for the both of us.

I would rate RAKU Ramen & Izakaya a score bordering on 3 out of 5. The service was attentive with the waiter constantly filling our tea, and checking up without being intrusive. We enjoyed our salad, tea and spicy salmon roll. We weren’t too crazy about the ramen. Did not finish the pork belly. I would come here again only to try their other items on the menu (there is this great looking fresh fish dish on the menu! Not for the faint of heart. Wonder if it tastes as good as it looks).

(Please note, I borrowed the first two images found on the internet. The food images are mine though. Also, I am finding the camera quality on my phone is not very good as its not doing these food photos any justice).