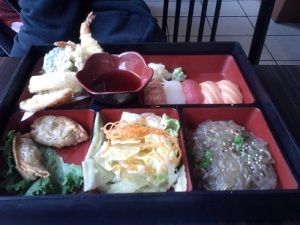 While we were downtown yesterday, we decided to have sushi for lunch.  There are a large number of Japanese restaurants downtown and it was hard to decide which one to eat at.   There were a couple on Queen Street West we could’ve settled with, but I wasn’t too crazy about them.

We strolled along Yonge Street until we came across one that caught our eye and looked decent from the outside.  We stopped in front of Toko Bistro and Bar, on Yonge near Wellesley.  We took a quick scan of their menu and it looked decent, large menu selection, and decent prices.

While we were waiting for the doors to open, I did a quick search on the internet to see what the reviews were all about for Toko – they were pretty good, some were low scores.  A lot of the reviews said the sushi was just okay….They are nuts!  The food and sushi tasted like heaven to me.   Like I said before in a previous blog, sushi in Mississauga does not compare to sushi in Toronto.  So what is average to Torontonians is above average for me, a Mississauganite…  Not only that, the prices were great!  The reviewers were complaining that the prices were not the lowest…Well they should take a trip to the west end if they want to see what high prices mean.  LOL!

We ordered from the lunch menu.  We had the Sashimi and Tempura Bento Box for $12, and the Sushi and Tempura Bento Box for $10.  The meals came with miso soup, salad, two homemade gyozas, an assortment of tempura, and six pieces of sashimi or five pieces of sushi.  I thought the sashimi and sushi tasted really fresh and soft.  I even ate the tuna sashimi (I usually leave the tuna behind because its not my favourite fish).  I liked the filling they used in the gyozas, it was hot and flavourful.  They were small, but just enough to accompany the meal.  The salad was great.  I really enjoyed the salad dressing, it had a nice zing with a hint of orange flavour.   Very nice!  The sashimi box came with rice, and the sushi box came with glass noodles.

Our meals also included 3 complimentary appetizers.  The portions were a bit small, but that’s okay for us.

A little more about Toko Bistro and Bar – It’s a Japanese/Korean restaurant, and has a conveyor belt.  Customers would just grab the dishes of their choice from the conveyor.  The conveyor wasn’t on at the time we were dining because I guess it was just too early.  This is something I will have to experience sometime soon.

Oh did I mention Toko Bistro and Bar has takoyaki on the menu???  I didn’t notice till after we ordered… darn!  The only place I’ve had it was at Sushiyama in Dallas.  I’ve never seen it in Mississauga.  Takoyaki is ball-shaped, fried octopus thats served as an appetizer and tastes amazing!