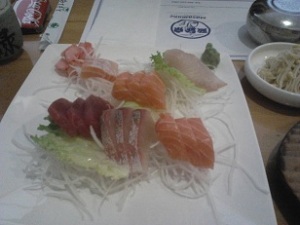 I went to a sushi restaurant called Masamune Japanese Restaurant located around Dixie and Matheson in a industrial looking plaza. I always think of that whole area of Dixie as an industrial area, or more of a lunch spot to go to rather than a dinner spot.

We got to Masasmune around 5:30 pm and the place was still empty. We couldn’t really see into the restaurant to tell if anyone else was there. More people arrived at about 6:30 pm. The place also had an old, musty smell. We sat in one of the tatami rooms right at the front.

I wasn’t too wowed about the menu selection – its just your typical Japanese Restaurant that’s available anywhere in GTA. There was a big Korean selection on the last two pages of the menu. I also thought the prices were pretty high.

We ordered the 17 piece sashimi set and an order of bulgogi dinner. The sashimi was $21 and the bulgogi was $15. We had miso soup and salad included with our meal. Both of these appetizers tasted good. Then our main courses arrived along with some traditional Korean side dishes – bean sprouts, spinach, etc.

I didn’t find the meal to be exceptional. The bulgogi tasted good actually – it wasn’t too sweet. But I think the dish was precooked ahead of time and when we ordered it, they just reheated it. It looked dry and kind of worn out at the top, but the bottom was more moist because the sauce was at the bottom. I also didn’t like the pot that they served the bulgogi in. The wooden part of the platter was very worn out looking and sticky feeling. It didn’t present too nicely….

I was disappointed with the sashimi – the selection wasn’t great – salmon, tuna, ‘snapper’ and another white fish. I put snapper in italics because I’m pretty sure its not real snapper. They didn’t cut the sashimi very well, or they served the parts that weren’t the greatest. They served us the end parts (thin parts) of the salmon.

I don’t mean to be so critical of the restaurant but I really think they are overpriced considering the meal wasn’t anything special… Maybe my tastebuds were just off that night… :S